There is a saying (perhaps apocryphal), “Every technology seems magical…until it transforms into a consumer appliance”. In other words, what elicits cries of astonishment when introduced (Say, the light bulb, elevator, telephone, television…and lately, the internet) ultimately blends into quotidian activities, when adopted by the masses.

What transpired with consumer electronics has now transcended into the realm of finance in general and personal finance in particular. Today, the word ‘technology’ is more synonymous with convenience and comfort rather than fear or dread. Algorithms which at one time seemed arcane have entrenched themselves so intimately into our lives that we now wonder how we did without them all these years.

This has a few obvious advantages:

The onset of Aadhar has spurred banks to launch ‘Web-only’ Bank Accounts – Digibank by DBS and 811 by Kotak Bank are two cases in point. Here an Account can be opened within a matter of minutes. Here, the bank can pass on the savings which occur on account of lower set-up and maintenance costs, by offering higher interest rates to depositors, that too without any ‘minimum balance’ stipulation.

Also, money can often be switched from a bank savings account offering 3.50 – 4 per cent p.a. to the same bank’s fixed deposit offering 7-8 per cent p.a. in a jiffy, with a mere click.

Even a stodgy product like the Public Provident Fund (PPF) can be subscribed to, online. No more dealing with officious bank clerks anymore, nor having to worry about a misplaced comma or full-stop on the application form.

There are a couple of marquee cases where technology has a role to play in the case of illiquid / expensive / exotic assets:

However, while such applications are exciting they are not really relevant to most consumers.

Hence I would like to restrict myself to only three traditional areas where technology is causing ructions:

Just a decade or so ago, cheque payments were ubiquitous, despite their lacunae like high counterparty risk and long lead times for receiving credit. Today, with the advent of an alphabet soup of fund transfer options viz. NEFT, RTGS and IMPS 24*7, cheque leaves are gradually losing their pre-eminent position.

It may only be mildly hyperbolic to say that cheques are headed the way of the Dodo. One sign of this is that a recent unsubstantiated rumour of cheques being banned, barely caused a flutter in the stock market. In the olden days, this would have been viewed as a seismic event.

E-commerce companies are hoping that the steady growth of online payments – through netbanking, captive e-wallets and credit / debit cards – will lead to fewer customers relying on the Cash On Delivery (COD) option. While this has yet to play out completely, it is heartening to see that the share of COD in Tier 2 and 3 cities is falling

However, even the traditional methods of cashless payments are likely to be overshadowed by an impending explosion in new modes of digital / peer-to-peer (P2P) payments, as is already happening in China through apps. such as WeChat and is slated to catch on in India too via WhatsApp.

While this trend began with the launch of e-wallets like Mobikwik and Paytm, it has actually taken off after the introduction of the Unified Payments Interface (UPI) platform as well as other new-age modes like QR Codes (BharatQR), Aadhar Enabled Payment Systems and contactless payments (Apple Pay / Android Pay). Blockchain based options may not be far behind, too.

Many providers (including Google and Amazon) have clambered onto this bandwagon and created Apps/wallets, which enable users to use the UPI layer to often bypass their bank’s portal while making payments. In an era where the most recent platitude is ‘Data Is the New Oil’, there is a clear and present danger of banks & credit card companies being reduced to ‘dumb pipes’ whom clients use merely as a conduit to refill their e-wallets but fail to get access to essential information on how that money is spent by their clients thereafter. That information will reside with certain Apps. (Uber / Book My Show) / e-wallets (Paytm) / e-commerce companies (Amazon / Flipkart).

For instance, imagine an entire Citibank Credit Card Statement containing details of payments to just three providers viz. Amazon, Book My Show and Uber. While the bank does earn commissions on these transactions, it has no clue as to where that money has actually been spent within these three Apps. That key data now lies within these three apps. and can be monetised by them in various ways.

Though most banks have created their own wallets (Pockets / PayZapp) in order to keep their clients within their ecosystem and battle the fintech. upstarts, they have only been partly successful, as many of these wallets lie

dormant within the smartphones of users. Strong network effects will mean that only a couple of large e-wallets

will survive and thrive, with the others either being taken over or shutting down.

The accompanying graphic (though slightly dated) depicts a few secular trends in the e-payments arena. These trends have only accelerated since then: 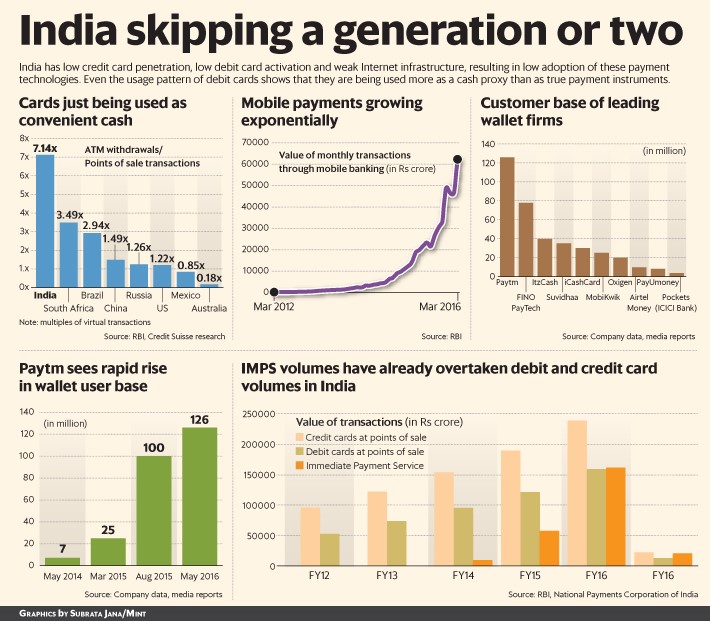 They help savers channelise their money into a relatively higher yield (albeit riskier) avenue of providing bridge finance / short-term loans to individuals and Small & Medium Enterprises (SMEs), who otherwise may have been denied access to money markets. 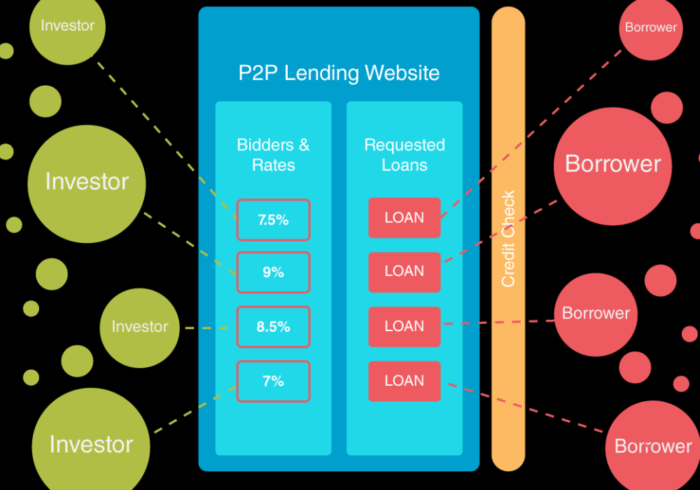 These techniques are now being employed by Microfinance Institutions (MFIs) to borrowers from lower strata as well. They have helped to expand the market by catering to segments which was ignored by banks due to systemic and infrastructural limitations.

While stock-trading portals are old hat, with most of them being reduced to mere commodities, rapid improvement in data-crunching prowess is also threatening to upend the mutual fund advisory profession. Today, financial planners have to contend with robo-advisors who purport to offer bespoke solutions, often at rock-bottom rates. Scripbox and ProsperX are two such portals engaged in offering automated advice on mutual

fund portfolios. While the human touch has not (yet) completely disappeared, advisors will be increasingly hard-pressed to justify the fees that they charge. 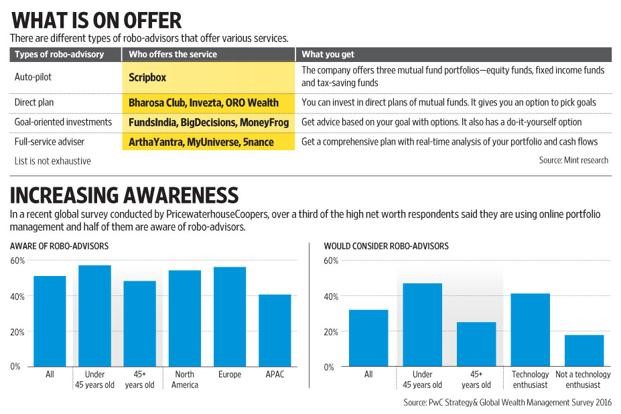 LiveMint (June 20, 2016)  (Slightly dated Chart. However, it is still relevant as it succinctly depicts the trend)

While even the biggest sceptics have admitted that online Term insurance is a pugnacious challenger to traditional life insurance policies, inexorable advances in analytics and computing power will impact the general insurance sector too. Auto, health and accident insurance premia can be customised for each applicant based on their individual traits and behavioural tendencies (such as driving patterns, food choices, etc.) This is far more nuanced than the current monolithic system of determining premia based on standard factors like age, the type of vehicle, etc.

This system will reward those who are willing to share their data (either directly or through certain accredited agencies) and help in pricing risk more appropriately, thereby reducing the possibility of adverse selection.

Bengalaru based Digit General Insurance aims to be a pioneer in this segment in India. It is also squarely aimed at those who prefer to purchase insurance digitally.

While most of us would agree that harnessing technology can confer great advantages, there is a flip side to it too.

A few disadvantages of being overly reliant on technology are:

The other extreme of too much data is that we can also freeze into inaction when we come across diverse pieces of seemingly irreconcilable news.

On balance, while the personal finance landscape will be increasingly driven by technology, privacy, security and regulatory issues will be the key variables which will determine the extent of adoption.