With US bond yields rising, there has been a flight of capital from India causing a high demand for dollars and a consequent weakening of the rupee. The rupee has depreciated sharply in the preceding 12 months from September 2017 onwards, with the exchange rate to the US dollar falling over 12.4% from about 64 in September 2017 to over 72 in September 2018. A significant part of the fall has been seen from August. This article attempts to evaluate some of the implications of this sharp fall.

Consequently, when the rupee started depreciating from January 2018 onwards, the RBI took a watchful stance until April 2018. Starting from that point, the RBI intervened by using the foreign exchange reserves to sell US dollars to stabilize the rupee and moderate the depreciation. Figure 1 indicates that the RBI used up over $25 billion of its foreign exchange reserves over 4 months from April to August 2018, which helped cushion the falling rupee. When the RBI stopped its intervention from August onwards, the rupee depreciated sharply to hit a lifetime low of over 72 in September 2018. Clearly, the RBI has minimized its market interventions and has instead allowed free market forces to determine the true value of the rupee over the past 2 months. 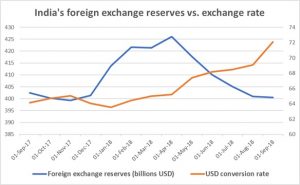 India’s biggest import is crude oil, with over 80% of the nation’s needs being addressed by imports. This extreme reliance on importing crude oil for meeting the country’s energy needs puts India in a vulnerable position with respect to currency fluctuations. The sharp rise in oil prices per barrel from an average of around $43.5 in 2016 to $56.1 in September 2017 to $77 in May 2018 dramatically increased India’s import bill. This, coupled with the steep depreciation in the rupee led to an extreme upward pressure on fuel prices in the country, which in turn led to high inflationary pressures on the Indian economy. Adding to this, the RBI has raised the repo rates and is likely to continue to do so to rein in the runaway depreciation of the rupee, thereby putting further inflationary pressure on the economy of the country.

Traditionally, a depreciating currency would spell bad news for import-based industries since it would push up the prices of the imports while having the opposite effect on export-oriented industries. However, many export-oriented industries in India rely on importing basic goods before re-exporting them, and thus this structure acts as a natural hedge against currency fluctuations. Consequently, gains through exports are counteracted by the adverse impact on imports.

India had an agreement with Iran to pay for crude oil in Indian rupees rather than US dollars, which had been a hedge against currency fluctuations. However, with the US pressurizing the world to restrict or terminate business with Iran as part of its sanctions which take effect from November, India will be forced to rely on more expensive imports from other nations with purchases required to be done in US dollars. Additionally, the trade war between the USA and China and increasing protectionist behaviour by major economies globally puts India’s export growth at risk.

The depreciation of the Indian rupee coupled with rising oil prices and geopolitical tensions has led to a difficult situation for India. An unavoidable fuel import bill causing an increase in imports which may not be offset due to potentially stifled exports is pushing India towards a high-inflation environment. Consequently, it is likely that the rupee stabilizes in the 68-72 range for a significant duration, rather than being a temporary fall. Hence, it is probable that rather than being a temporary aberration, the depreciation of the rupee to its current levels represents a new normal moving forward.

Aravind Shankar is a PGPX(2018-19) student at IIM Ahmedabad.